This is again a peculiar story about meeting people

and how my strange bicycle inspires other people.

The recent days I didn’t do long distances, although being in the south of Spain, this winter season doesn’t release a lot of solar power. I don’t follow the exact science about it, but I thought that the famous Spanish sun would drive me foreward at an speed nearing that of light. But it doesn’t, only some hours of the day there is sufficient power to charge m battery.

So yesterday I only reached 63 km. Today I wanted to do at least 66, just to push myself a little. When I reached my goal, I needed to do some more distance to find a good spot for my tent.

While I was sitting near my bike, chilling from the hot weather and listening to a podcast to improve my Spanish, my attention was caught by an email sent from my blog. 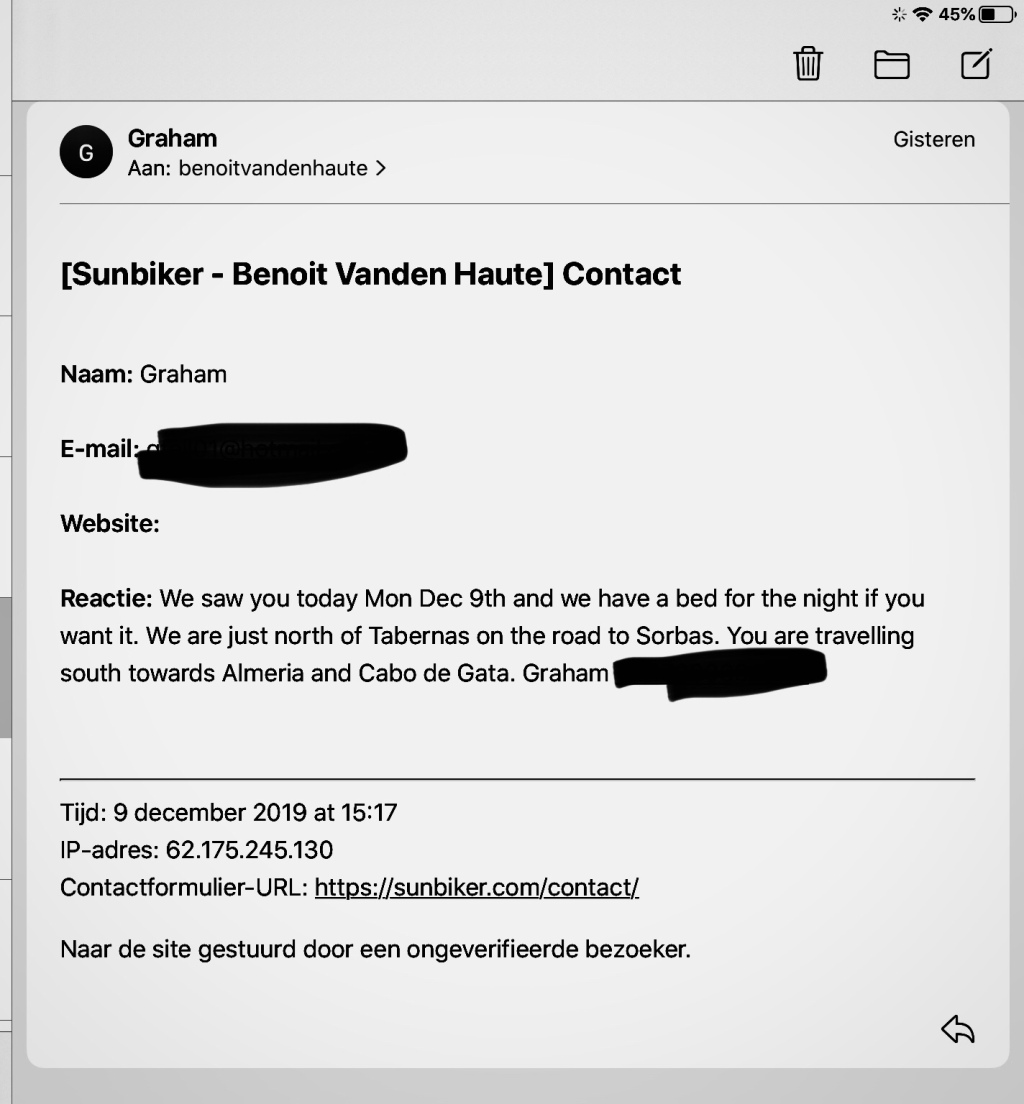 As I was already wild camping for some days, this sounded like a great offer, so I called Graham. I told him where I was and he explained me that I only had to go 2 km down the road and we would meet there. Not only down the road as in ‘a bit further’ also in altitude.

Graham, the pater familias, was staying at his daughters and son-in-law’s place, where they had a workshop making Carbon fiber parts for motorcycles. I was greeted with a warm welcome and- it where English people- a cup of tea. when I refused the milk in my drink he had to get himself together first, before offering me een milkless cup of tea.

We spend the evening talking about travels, experiences, the differences and the resemblances of the several European citizens. The kind of conversations typical for warmshowers & Couchsurfing connections. Each of these conversations broadens your view and builds more trust in the ‘other’ people. 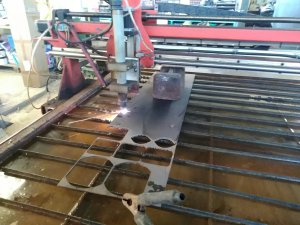 When I learned that they had a big workshop I was eager to see the work in progress, so in the morning I got a personal tour around. Seeing this well equipped workshop, my internal engineering office listed all the little improvements that could be done on the bicycle and trailer. But as I was already overwhelmed by the hospitality I decided to keep it with 2 little projects. Making Carbon fiber freediving Fins to replace my plastic ones. And making the wheels of my trailer suspended, where the works that I decided not to do here.

So we had a look at my tow hook, which has more play then I like. And seeing the plasma cutter, I saw immediately a use for that ultimate boys toy.

When I left for this voyage, more then 8 months ago, we ( I, donkey trailers who made the design and marine Technics who did the welding, thanks again!) had some concerns about the fixation of the wheels on the trailer, so far I have already made improvements 3 times, one of them was changing the wheels. Last time I repaired it, I had to work with a handsaw and hand drill. So the result was not really amazing, but it held.

Next thing in the workshop, we were looking at the plasma cutting machine cutting 4 exactly identical pieces of steel. This time they where 3 mm, replacing the hand crafted 2 mm ones.

As the sun wasn’t giving that much power, we unhooked the trailer lifted it to point at the sun at an optimal angle. This helped, as my battery had a full charge in 3 hours!

I left the family with a bit more confidence in the trailer and followed my route to the local desert and the film studios where the spaghetti westerns have been filmed.

And here you can find his point of view.