It was still the début of my trip. It was the first country where I haven’t been before. I was amazed by the gentle beauty of this newly discovered country, named Denmark.

While travelling, days of the week blur into one another, as well as official holidays. So the Easter holiday was only visible by the decorations in the shops and gardens. 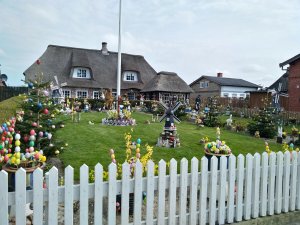 The evening before Easter, I arrived at a very calm shelter some few hundred meter from the road. I was surrounded by horses in their meadows. Beautiful horses, big horses. On the evening I already went to the meadows to behold these gracious animals. We both came closer to the fence to inspect our new neighbour.

I have only done some occasional horse riding, and I’m convinced I would love to make it a hobby, but it didn’t come so far yet. After a good night sleep in this well equipped shelter, when the sun returned the colors, and before I started breakfast, 7 horses ran by on the unpaved road. Of course I was quite surprised, the shelter had a fence, so it was safe. Eventhough the size of the animals made a big impression. Nevertheless I thought I had to take some action. 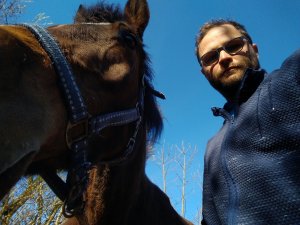 As those horses were giant, I had some hesitation to leave my safe shelter. Otherwise I had to find someone who lost some horses. As I grew some courage, I walked between the animals toward a local who could inform the owner. I tried to look selfassured while making my way through the -suddenly wild- horses. As soon as I reached the farm, I saw the owner of the horses, Magnus, who seemed a bit stressed. More stressed then I would expect from a horse owner. While I suggested to help catch the horses he asked if I was not afraid, I convinced myself I was not and told him the same.

The day before there was a wire between me and the horses and we had each our territory, now suddenly it was mixed up and I came very close to the beauties. As I closed to the animals, they looked even bigger, there shoulders towered above me and when they lifted their heads, I almost disappeared out of sight.While the owner showed which horses were the most gentle and instantly became my responsibility he explained that he and his wife were just getting into the car go to the hospital for the birth of their first child.

Clearly, that explained the nervousness. The nervousness of the owner, but I’m convinced also of the animals, as they are smarter and more sensible then we can figure out. When I took one of the horses I tried to express my confidence, I have no idea if that made a difference, all by all the horses followed my lead, and they were all showed to the stables. As the owner and his wife hurried off to the hospital I went to my little castle-for-a-day and enjoyed my breakfast, still a bit impressed. As I left for the road, a very friendly stable hand came running to me with 2 bottles of home brewed coffee stout. A few days later, in Gothenburg, where i stayed with a Ws-host, we cooled the beer in the fridge and enjoyed the beer and also the story from a few days earlier once more.

This was the beginning of my trip, only a few weeks underway and you can imagine that this left an impression, the coincidence of being there, the courage to get out between the horses, deciding to help and then suddenly being a little part of the birth of a little baby. 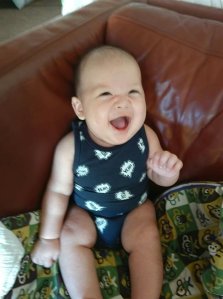 It took me a few months, before I tried to find the place were it happened via google and searching to contact them. And I succeeded: Here he is: Villad!

3 gedachtes over “A Christmas story… but then with Easter”